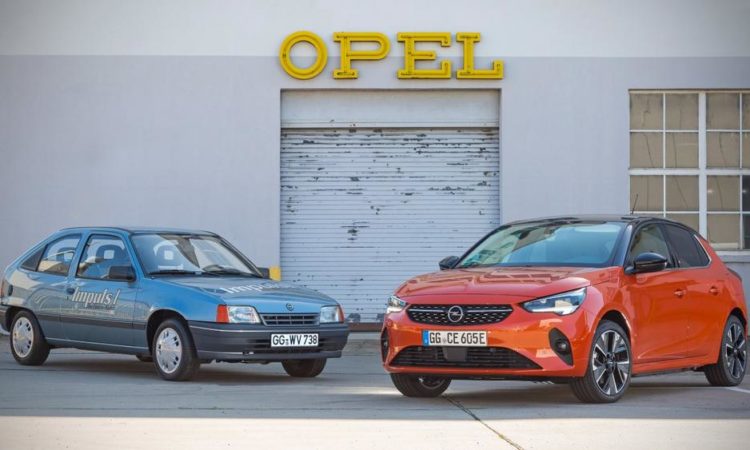 A range of up to 337 kilometres in the WLTP1 cycle. Zero to 100km/h in 8.1 seconds. A 50kWh battery that fast charges to 80 per cent of capacity in 30 minutes. The Opel Corsa-e is suitable for unconstrained everyday use – an electric car for everyone.

An e-Opel for a more specific purpose was the Corsa-e’s ancestor, the Kadett Impuls I. The German brand created the research vehicle 30 years ago especially for city driving. The idea was to find out how well a production-based electric car with currently available electric components would suit inner-city traffic of the time. On one condition: keep as far as possible the interior and boot space, as well as the payload of the standard production model.

Opel developed the Kadett Impuls I in cooperation with the RWE energy concern and the battery manufacturer SAFT – today the company’s partner in the planned joint production of battery cells at the Kaiserslautern plant. A 100V DC electric motor powered the front wheels. Nickel-cadmium batteries supplied the energy. In order to optimize weight distribution, the batteries were in the engine compartment and under the boot. They weighed a total of 310kg, contained 14.3kWh of energy and had a volume of 170 litres.

The maximum power output of 16kW (22hp) was chosen especially for city driving. Zero to 50km/h acceleration took 10.0 seconds. The maximum speed of the 1,000kg car was 100km/h. Inclines of up to 25 per cent were no problem for the e-Kadett. The braking system partially recovered the kinetic energy generated under deceleration and stored it as electricity in the battery.

For Opel, the Kadett Impuls I was another contribution to the traffic politics discussions going on at the time. Earlier examples included the Kadett B Stir-Lec I and the Opel Elektro GT.

Fourteen lead-acid batteries energized the 1968 Stir-Lec study. A rear-mounted Stirling combustion engine generated the electricity that kept the batteries constantly charged – a forerunner of the “range extender” principle that would later go into production with the Opel Ampera.

Only three years later, the Opel Elektro GT broke six world records for electric vehicles at speeds up to 188km/h – driven by Georg von Opel, the grandson of the company founder. Powered by two coupled electric motors producing 88kW (120hp), with a nickel-cadmium battery pack, the e-GT had a modest range of 44km at a constant speed of 100km/h – at the time, electric mobility’s biggest handicap.